The bankruptcy code is a one stop solution for resolving insolvencies which at present is a long process and does not offer an economically viable arrangement. A strong insolvency framework where the cost and the time incurred is minimised in attaining liquidation has been long overdue in India. The code will be able to protect the interests of small investors and make the process of doing business a less cumbersome process.

It is a single law which has been incorporated in Companies Act 2013. It lays guidelines for categorization of loans as Non Performing asset(NPA)  and the resolution of such loans.

A loan becomes an NPA, if its  principal or interest payment remained overdue for a period of 90 days. IBC lays procedures for resolution of NPAs within 180 days of the categorization of the same. This deadline may also extend upto 270 days in some cases.

Insolvency is defined as inability of debtors, individuals or corporate to repay their debts.

Difference between Insolvency and bankruptcy:

Thus, bankruptcy is just a formal declaration of insolvency.

What is the code?

Insolvency and Bankruptcy Code (IBC) was enacted in 2016, with the objective of ensuring speedy resolutions while signalling a break from the past.

Non-performing assets (NPAs) i.e. classification for loans or advances that are in default or are in arrears on scheduled payments of principal or interest  have become a major challenge for both public and private sector banks in India. In the exuberant milieu that started around 2005 and continued for three years until the global financial crisis (GFC) of 2008, large corporations conceived major projects in capital-intensive sectors such as power, ports, airports, housing and highway construction. Banks were keen lenders, with their aims of supporting the capacity build up in core sectors such as power and steel, as well as India’s infrastructure development across roads, ports and real estate sectors. Considering how under invested India was and the huge consumer market it presented, this seemed to be a big opportunity and banks invariably got into severe competition with each other to fund mega projects. The GFC followed by a period of policy in action meant that these large projects either remained work-in-progress owing to delayed environmental or approvals, or even if completed, under-utilised. As project owners did not realise anticipated cash flows over extended periods of time, bank loans began to go sour, thereby triggering the significant NPA build up. This debt burden piled up on Indian banking sector until 2016, when Insolvency and Bankruptcy code was initiated.

When and by whom was it initiated?

Adjudication: In the case of insolvency of companies, the adjudication authority is the National Company Law Tribunal (NCLT), while the cases involving individuals and limited liability partnerships are dealt by the Debts Recovery Tribunals (DRTs).

Insolvency Professional (IP): They play a key role in resolution, liquidation and bankruptcy processes. He is the one who takes over assets of the defaulter company and then initiates resolution proceedings.

Regulator: Insolvency Bankruptcy Board of India regulates all the cases under IBC.

Steps for Resolution of Liquidation of a Company under IBC: 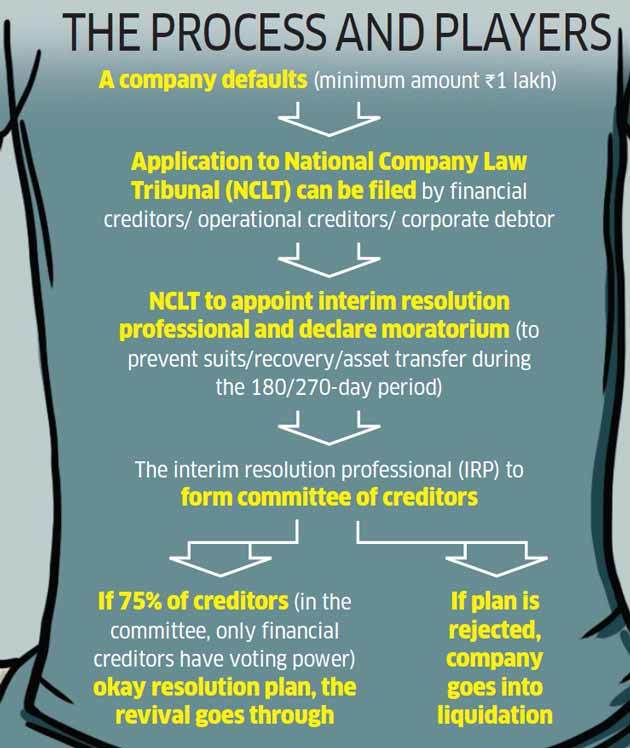 Significant delays in resolution: IBC has been widely acknowledged as a beacon of hope for creditors who have, for years, been waiting for justice. However, in most of the cases the threshold of 270 days has been breached because of procedural inefficiencies, lack of infrastructure and other frivolous matters. Not only does this jeopardise the basic premise of resolution within 270 days but also results in notional loss of interest income for lenders with every day of delay.

liquidation v. resolution: In some cases companies have received only a single bidder’s interest, but lenders have been unable to approve resolution plans as the bid values are much lower than the liquidation value. Lenders have preferred the liquidation route—however, it is quite probable that the liquidation process will extend for months and the value realised at the end may further erode from current estimates considering rising operational costs and insufficient cash flows. Hence, there should be a framework to enable conclusive decision-making where at least one bid is on the table, even if the perceived value creates higher haircuts.

First round of bidding started on 12th Feb 2018. The bidders in the first round were Arcellor Mittal,  Numetal, Nippon steel, Vedanta and Tata steel

But, after some amendments in IBC introduced the three of the bidders took their foot off, only two remained on ground to bid, Arcellor Mittal and Numetal.

The matter is still pending in NCLT.

Tata Steel’s wholly-owned subsidiary Bamnipal Steel Ltd (BNPL) announced the completion of its acquisition of Bhushan Steel, marking the resolution of the first case under the Insolvency and Bankruptcy Code (IBC), 2016. This was among the first lot of 12 companies that the Reserve Bank of India (RBI) had pushed to the National Company Law Tribunal (NCLT) for bankruptcy proceedings last year.

The most important outcome of the deal is that banks will pocket Rs 35,200 crore immediately, which covers most of the principal amount Bhushan Steel owes to its lenders, besides a 12 percent stake in the company. The cash payment immediately lessens the burden on banking sector.

But, the money was diverted to Jaypee group’s other flagship projects such as formula one racing center and Yamuna expressway.

The matter came up before the Allahabad  bench of NCLT after a petition by IDBI which advanced a loan that amounted to approximately  526 crores to the company. The company did not pay back to the bank and since bank was a secured creditor it had the right to ask for Insolvency Resolution Professional under section 7 of the code.

Jaypee group agreed to pay back the amount to the bank as it had the capacity to do so and by paying back it would be eligible for loans afresh and then it would be legally free from its obligations. As the homebuyersdo not fall under the ambit of secured creditors, the jaypee group did not have a legal obligation to pay them.